I finally did it. I finally jumped out of an airplane. Let me just say that it was one of those things that I have been wanting to do since I was sixteen and it has been on my bucket list forever. So I knew when I booked my flight to New Zealand that I wanted to do skydiving. My thought was that if I was going to do something as crazy as skydive I wanted to do it in a country that I always wanted to see and somewhere absolutely beautiful. So when I was on my flight to fiji (I had a connecting flight from there to Christchurch) I sat next to someone who was on their way home to Auckland. We got to know each other and he recommended skydiving in Wanaka. Originally I was going to do the dive in Queenstown and I was pretty set on it but the guy said he had a better time at Wanaka. So I made the decision to do it there.

My very first day in Wanaka I walked around town until I found a place to book the dive. I was immediately given direction and the girls there were absolutely wonderful. They directed me to doing the full 15,000 feet and told me that it was one of those experiences that you should do once in your life. I explained why I was in New Zealand, where I was from and etc. They were kind and encouraged me in the right direction. So they set me up for a skydive from 15,000 feet on October the 2nd. Surprisingly the deposit wasn't expensive ($45 in nz currency) and when I walked away from the booking I felt very calm and excited about the whole thing. I spent the rest of my day walking around, buying souvenir, and just enjoying the weather (an awesome 60 degrees at night and high 75 during the day). I can say that I went to bed with a clear mind.

The next day rolls around and I get ready like usual. I have a light breakfast and walk my way into town. The pick up time is at 11 a.m so I arrive at this place called the I-site and wait for them to come get me. When they arrived I got in the van (I was the only one waiting) and the guy talked to me as we drove over to the site.

Getting to the place I realized how busy it was and it quickly became clear that I was the only American among a bunch of chinese people. Apparently I came to New Zealand on a chinese Holiday and ALL of them wanted to skydive. So I went ahead and got in line, gave them my voucher and they handed me a piece of paper basically saying that if anything happens while we are doing the dive that they are NOT responsible in any way and that there is basically no way to sue them. Ok good to know. So I signed the paper. After that I was directed to a place where I watched an intro video on the proper procedures for falling out of the airplane as well as for when we land.

Once that was all said and done I was directed to a lady who then weighed me, had me pay and then I was told to enjoy my time and have some food or drink since it would be a while before they could get me in to do the dive itself. So I sat and waited for my turn.

After an hour and a half they finally called my name. I walked up to the desk and they handed me my jumpsuit and then told me that the weather has been on and off so they aren't sure what height they can go to but they would let me know. So I go outside, put away my stuff and put on my suit. Right away they come up to me and tell me that right now they can only go up to 7,000 feet and they wanted to know if I wanted to still jump or if I wanted to do it another day. I didn't really have a lot of window to decide so I just told them I would go ahead and jump. 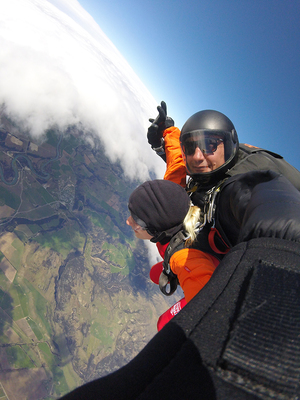 From there I was directed to the guy who would be jumping with me, he introduced himself and we began the video and photos. Once everything was ready I walked Next to Anthony who directed me the whole way through the flight. He made sure to check on me throughout the entire process. Once we were in the air he tapped my shoulders and asked if I was good. I told him yes and we kept going. The flight started with 7,000 feet and then they told me that they found a break in the clouds so they were going to 10,000. I watched as the first three people jumped out of the plane and I felt my heart race. This was really happening. Anthony then tapped my shoulder and asked if I was good. I said yes and he moved me forward to the door. Turns out that we were going the full 15,000 feet. 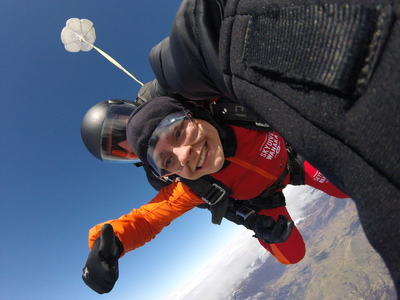 Let me just say, I felt no fear. None at all. Anthony opened the door, put my head on his shoulder and then we fell. I thought for sure I would feel my stomach turn, I would be scared, anything. All I felt was bliss. It was absolutely amazing. I have the whole experience on video and I am so glad I did it. Sometimes we let fear dictate our decisions and I am so glad I didn't let fear decide this one for me. It was so beautiful, peaceful and it was really just like flying. Not only that but I did it in a country that is known for being beautiful. Really I wouldn't change the experience for anything. 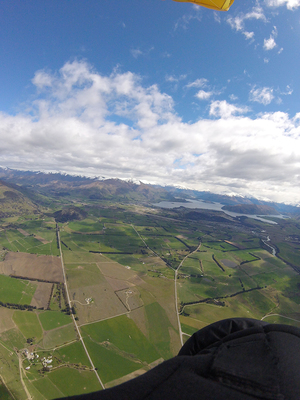