This whole transition has been interesting not only for me but also for Spice. So far she has learned that my bf and I's room is the safe place to be and the rest is unknown territory. Basically our half of the apartment is known along with the kitchen but the rest has to be walked on eggshells. She has also decided that my bf's roommate is an oddity and that she has to stand up to him at all times. We will be chilling in the room when we hear a series of hissing followed by some growling and sometimes we go save him but in the end, they both have to get used to each other. Saving our roommate each time delays that.

Were a little over a week of living here and its been quite a lot for her to take in. I think she still has this idea that we will be leaving soon and that this is only temporary. Little does she know that we have to move again in about a month and a half. That will really throw her for a loop.

But the good side of this is that she likes my bf and she has decided that the window near the lava lamp is her favorite place to be. After all, it is the area where she can sunbathe. So just as a little pick me up in these times I want to post these cute photos of her for you guys to look at and say Awwww at.

She just is so damn cute I Can never get enough of her. Life without her would be so boring.

Today is my beautiful child's birthday....and by child I mean my kitty Cinnamon Spice. Today she turned five and I just can't wrap my head around it. For Five whole years I have had her in my life. For five whole years she has been cuddling on me and has given me love. For Five years she has been a constant thread in my life. It's crazy when I see where she came from to where she is now. I am just so happy to have her and I feel so lucky that she loves me as much as I love her. Not all cats are super cuddly or lovey so to me it is quite a treat to have that in my life. 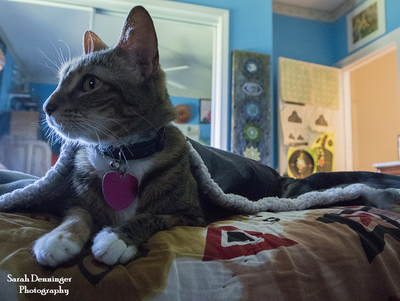 unfortunately I don't know what I can do for Spice since I will be at work all day today helping out to wrangle 150 kids on at the wall. I know that I will be exhausted but I am still willing to try and make a cat cake for her so that she has something for her birthday. I am not sure what yet but I am looking for a recipe as we speak. 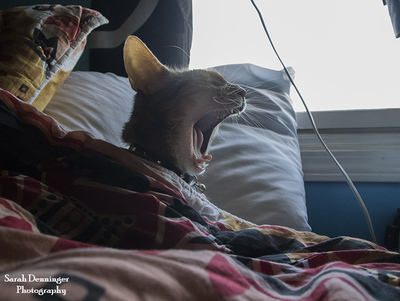 I'm not going to lie, I am so happy that I have this wonderful, adventurous, weirdo in my life. I never would have thought that I would own a cat and it wasn't until I met Spice that I knew I would have one in my life. Cat's really are so much fun. They bring joy, smiles, and laughter. They always get into stuff and they sometimes drive your patience up a wall but, then again almost every animal does that at some point or another. 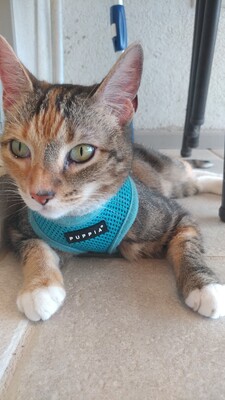 Ah, don’t you love the sound of the cat alarm going off in the wee early morning? No? You don’t have a cat? Weird cause I do. I have two of them to be accurate. One is my dad’s and the other is my little princess. Both of them like to wake you up in different ways. Spice likes to sit and wait for you while you sleep but around eight she gets tired of waiting and will walk on you to try and get you to move. If you don’t move she starts to try and climb your furniture and knock into things making it sound like there is a tornado in your room.

Then there is Midnight who not only will walk all over you to try and get you up but he also will try and open doors that he is not allowed to open. Of course they aren’t just any doors, they are the loudest doors in the world. He will try and try and try to get them open and each time you pop up to tell him no he walks away for a few seconds to only turn right back around and try again. Really it is quite annoying.

Of course if his door alarm doesn’t work he then decides that singing to his people is the next best thing. Spice does this two and with the two of them combined it is like an opera is going on but one that only cats can understand. To you it sounds like they are dying and they need to scream out to the world that they are being abused because their food isn’t out exactly at a certain time.

The life of a cat is so difficult, wouldn’t you say?

One of the things that Spice and I have worked on over time is her ability to listen and take some kind of command. As someone who is getting ready to travel the United States with  my cat I want her to be ready for almost anything. So one of the things we do at home is off leash training. At home we have an area where it is enclosed. This is a good place for me to let her off leash and to let her have some free exploring time. Personally I think it is nice to have those moments and it really does help when it comes to giving both us not only space but also time to explore on our own.

When I take Spice outside it is usually when I need to my artwork. I do it on the table in the back and its right in the center. This way I have a full view and can watch her at all times while I also stay shaded and can work in peace. Once I get to a point in a piece where I need to let it dry fora  certain amount of time I take off my gloves and go to Spice. I usually pet her, give her some loving nad tell her shes a good girl. Then I walk around the area and call her name out until she catches on and follows me. 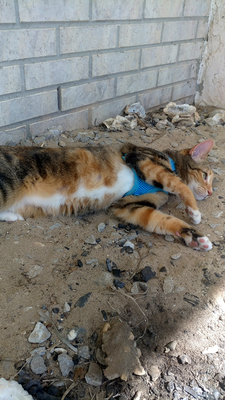 I do two loops around so that we can exercise not only her but also the ability to come when called. This gives her a chance to understand what is going on but to do it in a safe place. Sometimes she meows at me while she walks and other times she just follows along as I walk around.

The more I have exercised this the more she has gotten used to being off leash and the more excited she becomes about going outside and exploring. Every time we get a chance to go outdoors together it gives her some sunshine and me a time to work on my art. Really it is a win, win situation and I Really do enjoy those moments together.

My adventure kitty is getting more and more adventurous as time goes on.

So Spice's Birthday is today. This wonderful little cat of mine has turned four, which is about the age of 32 in human years. That’s crazy to me and I can't really say that I totally believe the chart I’m looking at but that’s what it says.

I got Spice as my 18th birthday gift. She came from a house that was filled with cats and she belonged to one of three litters at the time. She was very much loved and the owners had a hard time letting go of her. She was so adorable and really she was one of the cats that they wanted to keep around. See the people that had her had issues with getting their cats fixed since they 1)had so many animals and 2) not enough money to go to the vet and make sure that all the kittens got fixed at once. Not only that but the house was filled with fleas and so every time I went there I felt like I had left with a nest on my skin. It was not a fun time but I kept going back because Spice kept coming up to me and loving on me.

After about two weeks of consistently going back to the house and spending time with them they decided to go ahead and let me take her. They were upset but they knew that Spice had made her decision so they went ahead and gave me the ok to take her.

When I took her out of the house she was so scared that she was shaking. I cleaned her off in a tub and had her wrapped in a towel. For the drive home I had her in my lap and against my chest. The entire time she was staring up at me and giving me those half closed eye look. I knew that this little kitten had taken my heart.

From then on I knew that I was going to love her for her entire life. I had no idea what would come with this crazy feline but I knew that I would give her all the love.

Now fast forward to three years later and this little kitty is celebrating another birthday with me. Once I get back from work, the gym, and the bar I will be throwing her a cat nip party and taking tons of photos. I can't wait to share them with you all.