Boyfriend and Zion
Travels - Queen of Trades; Travel and Photography

My boyfriend finally came to visit me on my journey. He decided that he wanted to see Zion National Park and I can't blame him for wanting to come to visit me while I am out here. This state is beautiful and there is so much to see and do in this area. It honestly is overwhelming to think about and when it comes to deciding what to do it is kind of a lot to go through. In the end, he decided based on the photos I showed him and based on the fact that he wanted to be wowed in all kinds of ways.

while waiting for him to arrive (on his birthday no less) my friend Steph and I were dealing with a crisis. September 8th in Salt Lake City we had terrible winds come through. They were so bad that half of the city lost power. The hotel that she was staying in didn't have power and while she and I struggled to figure out where to go to do work and get coffee we also wondered what the best course of action would be for that night. The locals kept saying that it was supposed to get worse and I honestly wasn't sure if I should get a hotel or not based on that fact alone. Like I knew it was supposed to get pretty bad but I wasn't sure if that was true. After an hour of talking in her hotel and rearranging my suitcase with clean clothes, we finally found a coffee shop that was open and had power. That meant caffeine and we could sit down and enjoy some warmth while Lylah got to be out of the crate with us.

At the coffee shop, we sat, worked, and tried to figure out a game plan for when my boyfriend came into Salt Lake City. I knew that he would want to see Steph so I figured we could get dinner somewhere together and celebrate together. She agreed and when two p.m rolled around we realized that we had to head out and go somewhere else. The lady at the desk (in the coffee shop) was very nice and told us we could stay if we wanted but feeling guilty and understanding that she might want to go home we left and headed to our next destination.

Next was the gym. We hit the gym in hopes that they would have power. Sadly they did not and they were only taking members. Steph was a member but I was not. Defeated we left and headed out. Literally the next two hours we drove around the city trying to get a signal and book a hotel room for the night. The storm was so bad that our signal kept going in and out and places with wifi were all shut down because of the power outage. It really was frustrating and in the end, we got hotels near the airport. 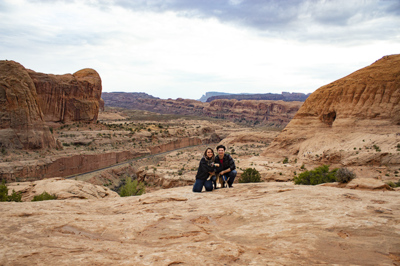 Getting to the hotel I walked in and realized that my bf was landing right as we walked in the door. Frustrated, starving, and just not in the mood I talked with the lady trying to get everything set up. She then tells me there is a $100 deposit on the room. Baffled and tired I gave her my card and said it was fine. The card declined. Annoyed I stormed out but realized I had no other choice and went back. Sucking it up and using the Atm I put down the deposit and got everything in the room quickly. I changed and then Steph and I were off to go pick up my boyfriend. It was the most frustrating day and yet when I saw him I instantly felt better about everything. It was so nice to see him after three weeks on the road. For me, it felt like longer but that was expected to happen when I started this journey.

Today we are going to check out Zion and tomorrow he flys home. I am sad that he is leaving but I know that is something that has to happen. It's just been nice having him here to hang out with and to explore.

If you wish to support my journey you can click the donation button on the right-hand side of the page. Every penny helps me, you guys! I also have art pieces for sale. Click here to go check out what I have left in my gallery.