Its worth Every Mile
Travels - Queen of Trades; Travel and Photography

Its worth Every Mile

For my birthday we did this hike that we had absolutely no indication on where it would go, how hard it would be, and where the end was. We just decided to go ahead and jump on a trail in the morning and just get our day started and after that, we would go from there. It sounded fun and I honestly was excited to just spend my birthday outside. After all, our lives deserve nature and to be celebrated. I got both that day. So we started on the trail and by the looks of google maps, the trail seemed pretty easy. We guessed it would be about four miles long and it kept going from easy to moderate and so on. Really it was one of those hikes that gave you everything. It went from pine trees to aspen trees, to meadows, to the creek, and finally to big switchback.

There were a few times that we looked at the google maps and we hoped for service to look up the trail on All trails but most of the way consisted of one bar.

Once we hit four miles we looked at each other and wondered where we were going. It seemed that the trail was sort of maintained and they had a big wind storm that came through and tore down a bunch of trees so someone came through and hacked up a bunch of trees to make the path more noticeable. We did run into a few hikers who told us that the path was a loop and eventually we would come to a fork that would give us an option to go back down. Thinking that we would be able to find it easily enough we kept going and around five miles we stopped. The trail looked like it literally went straight up a 90-degree angle. Unsure of how to feel we kept moving forward. I felt myself start to get drained and then I saw the little brown signs. There were switchbacks to our right-hand side.

We went up to them and go to the top of this mountain. We then met another set of hikers who told us that we should go to table mountain. Looking at the path we wondered if we should. We were tired, low on food and low on water, and slightly defeated we asked the ultimate question. 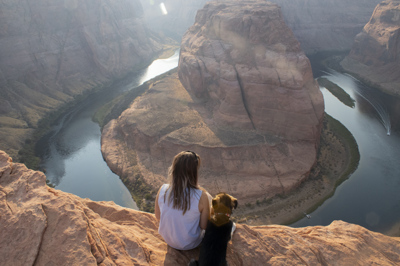 "How long did it take you to get up there and how steep is it?"

"Took me about an hour and a half but I felt the elevation gain. It was worth it and really pretty"

Staring at each other we knew that if we didn't go we would regret it later. So with some deep breaths, we kept going....and going.....and going. This hike was hard. There was gravel, there was elevation gain (4,000 to be exact) and there was so much wind. Trudging onward we tried to take breaks and once we were good and our hearts weren't in our throats we kept going. Eventually, we made it to the top and our hearts stopped. It was beautiful. Right in front of us was the Grand Teton. It was unlike anything I Had seen. My birthday was complete. I kid you not, the hike was at least eleven miles all the way around but it was so worth it. It was hard and I was dead tired and needed a glass of wine after (which I spilled sadly), and it was much appreciated after all that we had done.

So if you ever want to see a different view than anybody else of the grand Teton then I would recommend the Table Mountain Trail in Jedediah Smith Wilderness park. It's worth every mile