With moving here I am almost always out doing something. It could be walking, climbing, hiking, anything really and it has been amazing the changes that have happened. I'm running in the morning these days which if you knew me, almost never happened. You only got me out of bed (in the early mornings) for races and that was only on Saturdays. Any other time that I wanted to run was later in the day or in the evenings and that was my routine. If I got done working late and had planned to run I would go out and run. Even if it was late in the night.

When I was doing my first half marathon I worked at Kilwins. At Kilwins I mostly worked night shifts so we would get done around 10 p.m sometimes 11 p.m and I wouldn't get home till 11:30 or at the latest 12. Those nights were hard when I had to go run because I wasn't just running, I was training and I honestly didn't have a choice then. I would get home, change, have a glass of water, and go out and do the distance. It was hard but I did it and my half marathon was a success. I did the race in 2 hours and 6 minutes and I felt so proud of myself for making it happen. 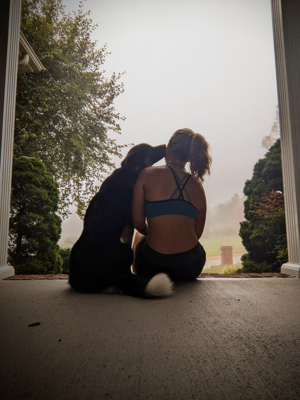 My second go at a half marathon I did mixed training but it was more of the same. I did a mix of nights and afternoon training but I really had wished I had gotten up early enough to get it done first thing. I just never could get myself to commit and with Florida weather it was hard to know when it was ok to go. Some days you get ok humidity and other days you were drenched in the first half-mile. You could never really win in that state.

Now that I live in Tennessee and I have a friend who has been running mornings with me I have the motivation to actually get up and run before the start of the day. It's been so nice here. 50 degrees in the morning and by the time I'm done it's around the low 60s which is fantastic and makes the mornings so much better. Not only do I get my run done early but I also get to actually enjoy the fall weather and not die from humidity or heat waves.

The plus side to this is that Lylah also gets to enjoy the run because it's cooler and this way she can get some exercise first thing in the morning and get to enjoy the fall time with me. With this change of pace and lifestyle, I'm hoping that training will go smoothly. I've been slowly increasing the milage with Lylah so that I can acclimate her to the milage and also be better prepared this time around. I feel like in my last two training sessions I was able to really accomplish a lot and I learned what I do and don't like when training for a distance as long as thirteen miles. This time I feel like I have a better handle on my abilities and where I need to be by the time I get to the race.

I'm nervous, excited, and feeling good. Three Half Marathons in my 20's isn't so bad. In honesty, I never thought I would be someone who would do more than a one-half marathon but here I am, signed up for my third and really pushing my limits not only as a person but as a runner as well.