Disclaimer: This post is about climbing outside and I will try to keep it simple for those reading but I felt like I had to post on what's been going on.

When I moved to Tennesee I made a friend who I have been hanging out with constantly and also climbing with. We have the sport in common and in the three months since I have moved here we have escalated from just climbing in the gym and departing ways to going outside for weekend trips in a matter of a month of our meeting. Ever since we started going outside more and doing these trips we are constantly outside climbing every weekend. This has become normal and it's quite fun and thrilling for me. Normally I climb rock that is like 10-16 feet and then there's a pad to come down on with someone to help spot you to land on the pad or make the fall easier, etc (or if you go to the top and finish then you find a way down on the boulder your on). With meeting him and now having so much access to this wonderful world of Mother Nature we are going to much higher places and doing longer climbs where a rope has to be involved.

With rope, there are two versions of climbing that we do. One: The rock has a set of Bolts in the rock and as you climb up the rock up using a quick draw (which is two carabiners that can hold up to 2000 pounds of weight on them with a piece of rope in the middle of the two carabiners)  to set yourself in the rock and keep from falling back down to the bottom. When you use a quick draw you attack one carabiner to the rock and the other to the rope you're attached to and once your secure you keep climbing to the next rope. This version is called Lead Climbing or Sport climbing and it's actually super scary but thrilling if you can get past your fears and if you have a good partner. (the partner is down below watching you climb up feeding you rope through a device called a GriGri which automatically locks if you fall but this is a sport that requires two people)

The second version is one that a lot of people enjoy but is not as scary as Lead. This one is Top Rope and that is where the rope is already looped in at the top of your climb and all you have to do is start from the bottom and climb up. If you fall and have a good partner it's a super shortfall and most of the time you don't go anywhere from where you "fell". It's quite fun and if you want something calmer but want the endurance or just to experience a route that you don't want to **** your pants on then that's for you. 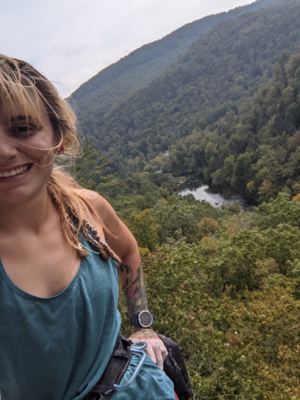 Now, this whole experience with ropes is thrilling for me and the fact that I get to do it so often has been an eye-opener. Literally. I love it and with my friend, J, he has been so supportive and hasn't been pushy about the climbing. He's only been climbing for a little over a year which is great but he also is strong and more capable of moves that I am a little sketched about. So Normally he will lead the route and then set it up as top rope for me to then climb and give it a go. Of course, I do lead some routes because I need the practice but it's a huge mental game because of the fact that I have a slight fear of falling and because I haven't gotten used to falling far distances.

So this last weekend we were out climbing and I was doing this route that was long. Like 90 feet long. Way up there but it was highly rated and the bolts were not far from each other so this was good practice for me with clipping in and also for endurance and the payoff was a great view of at the top. Of course, J goes first, leads it, and does great, no problem. He comes down, tells that there are a few places with questionable moves at the top (which I can't see because of the rock formation) but says that it's a good climb, and I got this. Now when J says that it's questionable moves Usually my mind is going in all directions thinking it's some move where I am going to fall a good amount and struggle somewhere where my partner can't see me catch me. Pushing that aside and take a deep breath and proceed to climb this amazing route. The first few clips go fine, I'm having a good time, it's pumpy so I'm taking breaks but it's good. Then I get to this section where the struggle began.

First, it's overhung which means I don't have a lot of ability to push through. I don't lift any weights or go to the gym to work on my strength. Nothing like that. So I'm going on pure adrenaline of the fact that I might fall the first time I get up to the next bolt. Now just a disclaimer here if you have never climbed before or seen videos of it for whatever reason, Go watch a video of someone falling on a sport climb. Some end up really good and some really bad.

I get to the bolt and I swear the mental game kicked up ten notches. The first time I couldn't hold on long enough to even think about getting a quick draw so I yelled at my partner that I needed him to take slack on the rope to pull me back to the bolt below and he did that and then I fell. Now it wasn't a hard fall or a long fall thank god (communication is a great thing) but I did fall nonetheless. So I take a break where I am, shake my arms out and after a bit, I go again. This time I'm overthinking x1000 and tried to go for a hold a little past where I am supposed to clip in, realized my error, yelled at J to take slack, and before I could feel the rope tighten I fell for real. A true fall on lead.

First, let me say I am grateful for J being my partner. I trust him with my life 100% after all this climbing we have been doing but oh my god did that one hurt. I swung into the rock and my right toe jammed into the rock itself. Hard. I felt that pain immediately and with climber shoes it's inevitable you will feel pain. Imagine Ballerina shoes but with rubber made to stick to rock outside jamming into a rock at full speed. So painful.

The good news about this is that I have now fallen a number of times while climbing with him and that makes me feel more secure about him as a partner and I also now have a little less fear because I know he has me and that we work well together. When it comes to saving your life having a good partner is key and I am grateful for that.