Fun Fact of the day
Travels - Queen of Trades; Travel and Photography

Fun Fact of the day

Here's a fun fact. Over the last five years, tattoos have become so popular that almost half of America's population has one. Isn't that wild? When I was growing up they were considered weird or out of the ordinary. Now (as someone who is in her mid-twenties) Almost every person I know has at least one. It's so popular that most people don't bat an eye and I remember when I was sixteen how badly I wanted them. My dad always told me that if I got one it never came off and I needed to choose wisely where to put them if I wanted to work for some companies in the future.

Well as some may know that didn't go well when it came to placement choices. I have tattoos on top of both my hands and I love them so much. I'm even planning to get another finger tattoo in the next few months. I just think are so cool and even though the chance of them fading or being distorted over time is higher than anywhere else on the body, I think that's totally ok. After all, eventually, all of my tattoos will look funny and faded but I will tell you what, I will look badass because I will own my ink.

Every piece of ink on my body is a representation of who I am. It's a part of my story and I love every single one. I won the fact that I made those choices and I know that for a while it made my grandmother upset (when she was alive) but changed her mind a few months before she passed. She told me how beautiful they are and that she loved them. That honestly made me feel so happy. Nobody else's opinion (except mine of course) matters to me and that included my grandmother. I know she wasn't a fan but to have her compliment me and tell me how beautiful they are made me just feel so happy and accepted by her. 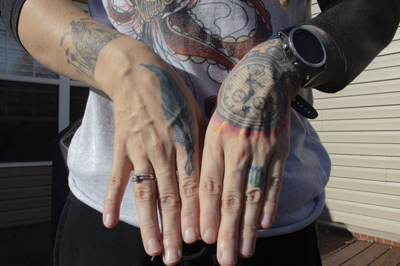 The thing about where we are now, as a country is that we are changing and that includes our ideals about piercings and tattoos. It's pretty normal now to have them and if you are one that doesn't have them that is 100% ok. If you do have them then good for you for sitting in the chair, putting up with the pain, and deciding to have that on your skin. It takes a lot to sit in that chair and just soak it in as you wait for that artist to finish up.

For those that still think it's wrong to have ink and tell people shame on them or that they are in the wrong maybe you need to reconsider that idea. The numbers are increasing and it's just not cool to tell people they are wrong for something that they decide. If they regret it later then they regret it later and that's all there is to it. But to shove it in someones face just is rude and uncalled for. Times are changing and unfortunately were just going to have to accept it.