Guess what happened!?
Travels - Queen of Trades; Travel and Photography

After the half marathon at the Tetons, I randomly decided to go ahead and sign up for the 5k In Yellowstone. After doing the half in the Tetons and having a few glasses of wine I just decided to embrace my abilities (even if I'm slow) and see what I can do at the 5k. Back in Florida I used to run 5ks with my dad regularly and of course, it meant getting up stupid early to do it but I didn't mind in the end. After all, I ended up placing at most of the ones I participated in, and really that was a nice confidence push.

Then covid happened, dad moved and everything kind of got turned around. I did virtual races but those were just for me and I wasn't really training to be in any race. All in all two years passed quickly and I didn't know if a 5k race would happen anytime soon. Moving to TN I was slower and moved up in my age bracket so the competition was steeper (Turns out that once you turn 25 a lot of females get into running races. Who knew?)

So with a couple of glasses of rine in me and already knowing the 5k course for Yellowstone and being only a few hours from the Tetons I decided to go for it. After all why not. What's the worst that could happen? 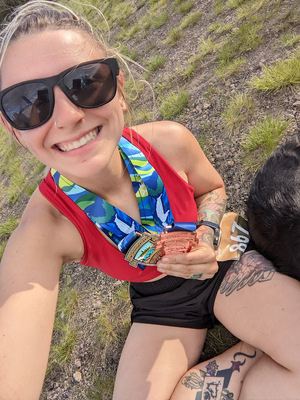 The week flies by, I make my way into Yellowstone, settle in, and get ready to run the next day.

Fast forward to the race and I am in my van getting ready. I am alone with Lylah unsure of how this will turn out but I am ready. I want to get it done and I can feel my impatience. I tried to edit photos to pass the time but it didn't help too much. I got out of the van and walked in circles and finally when the announcer stopped talking we made our way to the start and sat there for fifteen minutes while the announcer talked away. honestly, I'm not much for the sitting and listening aspect. I wanted to run and get it over with. See how I would do and feel the impatience roll off me. Those fifteen minutes were so long

Finally, we did the National anthem and the 60-second countdown began. In this race, the people that were going for a medal were allowed to go all the way to the front and bypass the people that were there for the first time or were just doing the fun run. So I stood my ground in the middle of the group ready to go. 60 seconds counts down and were off.

The short version of what happened is that I started out really fast and then slowed down by a minute the second mile. In the third mile, I cut off about 20 seconds and then another 8 at the finish by going balls to the walls at the end and chasing this tall dude down for the last tenth. I crossed the finish line and heaving I took the medal and sat down on the grass to catch my breath.

The course was great the problem is that it was in the sun the last mile or so which heated up the course like crazy. So I quickly got overheated but was still able to give it my all.

With the finish line behind me, I took a chance to get Lylah out of the van and hang out in the grass. recovered and resting I waited for the results and guessed what happened. I placed 5th in my age group! It may have been last but I freaking placed. Just barely but I was so excited. I wanted to give it a try and I did it. I was able to get a 3rd Medal for two races in a week's time. What a wonder and what a time. So glad I decided to go ahead and sign up at the last minute.