Another Medal
Travels - Queen of Trades; Travel and Photography

Yesterday was the Lucky leprechaun race. In the past I have never had the pleasure of being able to do them before and this time I had the chance to run in the race. So I decided to go ahead and give it a try. Of course when it comes to races it means that you have to be up really early to not only wake up but to also have some coffee beforehand. If you don’t give it enough time to settle then things can get a little "messy" while you are out racing. To avoid any messes I take extra precaution.

For this race I knew that it was on a course that I really enjoy and I also knew that two of my favorite people were running it. One of them was my bf D and the other was my Dad (or as most of you know him, the market ticker). All three of us were running and all three of us were going to see what we could do. For dad and I it was a routine. We run and then I split right when I finish so that I can head to a friend’s house to shower and then go to work right after that. For D it was a test to see how far he had come along in his running. We wanted to see how he would do in a 5k so that we can get a feel for a possible time on a 10k.

This race was slightly crowded (more than others I have been to) and this one was one of those races that you know everyone is trying to finish quickly so that they can have drinks at the end. So when the race started everyone was moving like a pack. Everyone was moving together for a while and the people that have raced before or were faster than the people in front of us found ways to weave in and out of the crowd so that we can actually challenge ourselves. That quickly happened for me. I found my way in and out of the crowd and I passed many people in this race for the first mile and a half. Once I turned around I saw D and he ended up High fiving me on the way.

For me it felt like the race was over as soon as it started. My time was really good and I felt good after the race. Of course I Had to catch my breath for a second so that I could actually drive home without suffocating. I had given it my all the last half mile so I was having some trouble with breathing. Once I had cooled down I told my Dad the time I thought D would have and I told him I loved him. Then I went ahead and started making my way back home.

The day went on and I found out I placed second in my age group which is awesome. I also found out the first place in my age group ran the 5k in 22 minutes which was four minutes faster than me. So I was glad to take second. Dad got third place in his age group so he got to go home with a prize himself. D got to know his time for a 5k and now has a goal to work towards. I think it has lit a fire in him. 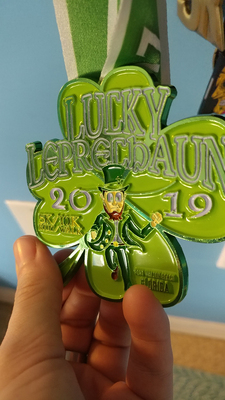 I can't wait to do other races and see how much better and faster we all get. It’s so exciting.