Driving Both Vehicles
Travels - Queen of Trades; Travel and Photography

I finally got the plate and insurance for my Truck, Todd. So that means that I can now drive it around town and get a sense of how many mpg it actually gets. To be truthful the vehicle itself is really nice but driving it gives me flashbacks to when I was fifteen and learning to drive. The biggest difference between Todd and Vanessa is that 1st gear is very different between both vehicles. Now for those of you that don't have any idea what I am talking about let me take a step back and give you the rundown real quick of my two cars.

Vanessa: Vanessa is a 2003 Jetta Volkswagon. She is a diesel engine and a 5 gear manual transmission. She is loud but also very fast once you get her in fifth gear. She can go up to 140mph and may even have a little bit of turbo under the hood. My dad even installed a metal plate under the engine so if I run over any animals or debris then it wouldn't go in the engine and total my car. Now since she is desiel that means when it drops below 50 degrees outside she gets cranky and doesn't want to start. Because of her age, she also has a lot of parts that need to be replaced. Luckily its been only one thing at a time. She has a few scratches here and there but no dents and no accidents. I've been driving that car since I was fifteen but I also grew up in that car. It has only been in my family and I plan to use her until she literally can't run anymore.

Todd: Oh good ol Todd. I got him back in September before I went to Iceland. He has never left Florida (from what we can tell underneath) and he is a little old fashioned. Todd is a 2000 Xterra, Nissan brand. He drives like a truck, sounds like a truck, and feels like a truck. He is also a five gear manual transmission but instead of being diesel he runs on gas. Todd can go up to about 100mph and be honest I have not gotten him that fast yet so I can't really say how he runs at that speed. Truth be told, I probably won't take my chances with him at that kind of speed. Todd has no dents, a new coat of paint to cover the scratches and gross deterioration of the original paint, and has had a **** ton of repairs. The good news is that all the repairs have been done for me by the previous owner. Now I don't know enough about Todd to really give you all an idea of how he is on the road but so far I can say that he is a lot to get used to. 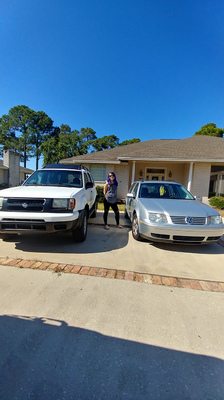 Now both cars are amazing vehicles but Vanessa will always be my number one. The reason being is that she gets some amazing mpg. Like, people keep telling me to trade her in but that is not going to happen. They just don't make cars that get 50mpg anymore and even if she is a little "outdated" she still runs like a newborn kitten. But right now I am driving both vehicles so that I can keep both of them moving. For Todd I'm just trying to get used to driving him around since he will be my main vehicle while I am on the road. He can pull about 3,500 pounds which is extremely useful but of course, if you don't know how the vehicle drives how can you trust it when you're traveling around? You can't.

So yesterday I drove him to Destin and let me say, I am so glad that it was night time because I stalled at least twice. First gear is such a bitch in a gas vehicle. I'm so used to giving out on the clutch and the car moving on its own but when it comes to gas cars that's not really a thing. You have to give gas while letting go of the clutch. So I was very scared of getting hit whenever I stalled. To be honest, I'm not used to stalling out on a vehicle anymore so when it happened the first time I felt myself panicking. Luckily I reacted quickly and was able to gather my bearings to get it under control.

Ya'll driving stick is so useful but man is it scary when you aren't familiar with the vehicle.