I  don’t know if any of you remember Hurricane Ivan (2004). It was a crazy hurricane that went from a cat 3 to a cat 5 in a matter of days. Back then we had a 45 foot hatteras and lots of friends that lived in the area. We were living in the same house we live in now and the worst part...it was around my birthday. I was supposed to have a pool party that year. All of my friends were going to come and I was pretty excited about it. Then of course Ivan came swooping in and caused a panic in the panhandle. At first we weren’t sure if we were going to evacuate or stay. We had friends that were staying with us at the time and we all were waiting for my Dad to make a decision on what to do.

I distinctly remember being handed a trash bag and told that I get one and only one to pack my stuff in. I had to choose only what I wanted to keep and leave the rest behind. At that time I was so conflicted about my belongings and I wanted to take everything with me. I didn’t know what to do and I wasn’t sure how to make things work out. I was confused and scared. This hurricane was going to ruin everything.

So I packed my trash bag and sat there helplessly as my Dad grabbed it and threw it in the back of the truck. We were running around like crazy and I remember at the last second when my Dad changed his mind. I don’t remember what made him turn and decide to stay. Maybe we still had the news on the radio or maybe it was just from judgment alone. Either way I knew that whatever he decided that we were going to be following his lead. 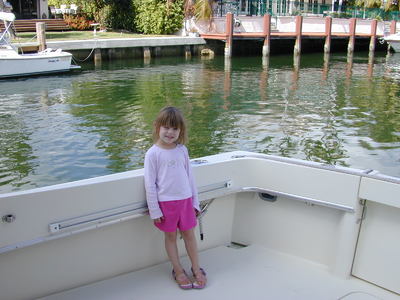 With the decision to stay we changed plans. We moved the truck in front of the garage to create a wind barrier, we grabbed the rug in the living room and pushed it against the sliding door to keep the water out and we had towels all over the place. I remember the water being an inch from coming inside the house. We were so close to losing everything and having all of the water coming pouring in. We were concerned about everything we had inside. I was most concerned about us drowning and getting eaten by sharks. I was also really sad that this was happening on my birthday. I wanted to make it a fun day and Ivan had to take it away from me. I remember sleeping very little while the hurricane was going on around us. I felt like if I fell asleep, that I would wake up to the roof being gone completely.

That year we got lucky with deciding to stay. We managed to save the house and everything inside it. We didn’t loose anything but we did suffer damage. Our neighbor even lost his dock completely as well as his boat. For us we just got to witness our neighbors kayaking down the road once the storm had calmed down. It was like our neighborhood became a sea and we were stuck in it. Sure it was cool to see such a sight but with all the damage it caused I would gladly pass the chance to have it happen again.

Now I dearly hope that Irma goes the other way. I don’t want to have the same thing happen again. This time there is no boat to retreat to and to us there’s more to lose this time then there was last time.

So stay away Irma, I really don’t want another hurricane to come our way when my birthday is just around the corner. Ivan did enough, I don’t need another memory like that.