After I had done the skydive I knew that I wanted to do something a little bit calmer but also new. So I went into the cardrona booking place and talked to one of the ladies about doing the waterfall climb. She smiled and booked me a time the next day to do the climb. It was a five hour trek and that meant I would be up at 9, picked up by 10, and then out until 3 or 4 in the afternoon .

So of course I go through the day, get a good night's sleep and I'm at the i-site waiting for them to show up .Two people walk out and introduce themselves. I shake their hands and I check in with them on any possible allergies, dietary needs, or health problems .luckily I'm easy and healthy as a horse so it was a quick check in.

Once that's done we pile on the van and drive half an hour out of town to this huge waterfall that is on some private property that this guy owned. The farmer had a heard of deer that were walking around and we learned that he had one of his friends from Europe build this climb and make it into a side business.

Once we're out of the van we gather around and we're given a harness, raincoats and I was given a helmet for my go pro camera. Now those of you that may be a little confused I'll explain a bit. The climb isn't the traditional top rope climb or a bouldering climb. It's the Europe version of climbing. The used it back when they were at war to move troops around the mountain.

Basically there are metal handles that are sticking out the mountain and those are your hand holds and your foot holds. You have three sets of clips on your harness .one called the shortie which takes the force if you do slip or fall and two longer clips to put into a wire that is your guide on which direction to go. Our guide called them cow tails. So basically you clip the shortie onto a hold, clip your cow tails on place, take the shortie off and then climb. Once you reach an area where there is a not in the wire, you clip the shortie on the closest hand hold, move the cow tails to the next wore, and I clip the shortie and move forward. It's pretty basic and really it was an interesting technique to use .

So we go through training, we give a thumbs up that were ready to go and once everyone was together we begin the climb. 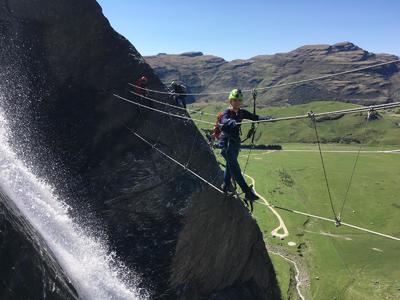 Now if you are a climber I do recommend trying it out because it is quite the experience, it's beautiful and something that I would want to take the family on. Your literally right next to the waterfall as you climb and at one point you cross the river right in front of the waterfall. It's about a four hour climb to the top and the lady said it's a little over 1,900 feet climb. When your doing the climb it doesn't feel like it's that high but once your up there you can tell that you really have come a long way. 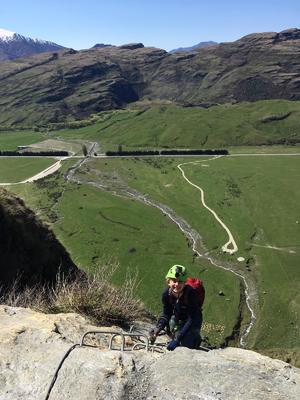 If you like to do something new, fun and a little bit challenging I do recommend it .it is quite the treat.