So if you are a L.O.T.R's or Hobbit fan that I must tell you that you have to go see Hobbiton. When I arrived I really couldn't believe my eyes. It was literally just like the movies and I was sure that I was in a dream. All these years of watching the movies, sitting on the couch just mouthing the words as the movie was going on, and just enjoying some much needed bonding time with my father as we sipped our drinks and watched the endless battles and I was finally standing in the one place where many breakfasts, lunches, and dinners happened. A place where magic comes to life for all us to relive in our homes whenever we wished. 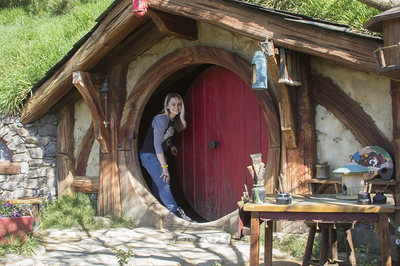 Yet here I was, standing in the one set that they decided to keep alive. The Shire was made into a real place only just recently. They first build Hobbiton back in 1999 and really it was build to be a temporary structure only used for the L.O.T.R's films and then when the Hobbit movies were made they decided to make the 39 Hobbit holes into a more permanent structure. This was done in 2009 and to this day it is now a huge attraction. I remember our tour guide asking us at the beginning if anyone wanted to recreate the scene where Bilbo runs out of his home and shouts "I'm going on an adventure!" and I was the only one who volunteered . I did it was much enthusiasm and to be honest I had been wanting to do that since I saw the film for the first time. 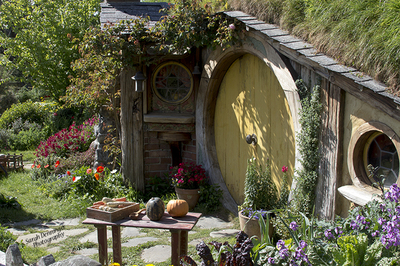 The tour really is quite magnificent. You get to hear all the stories, you get to take photos, adn you get to enjoy the feeling of being in the Shire while your surrounded by Middle Earth. Its quite extrodinary and I couldn't help but smile the entire time I was walking around. There are so many Hobbit holes and there are so many wonderful feelings you get as you take photos and hear the guides tells stories about the Shire, the construction and Peter Jackson. O

f course at the end of the tour it ends at the Green Dragon where we got to taste some of their selections of beer and enjoy the magnificence as a whole. Really I would do it so many times. I would tour this place time and time again and I really dont think it would ever get old. Its just amazing and seeing something that you grew up with in real life, is like nothing I have ever experienced.