Pets for Snaps
Travels - Queen of Trades; Travel and Photography

While I was in Iceland I wanted to take pictures of the horses that lived there. I know that it sounds weird but Icelandic horses are just so different from your typical horse. I ran into a lot of them while I was traveling around the country and you could tell that some of them were wild and some of them were part of a farmer's land and had a lot of interaction with people. One of the things I noticed about them is that some seemed to have a "Beard" of sorts that went down to almost the end of the chin but not fully. It was an interesting distinction from the usual horses that I rode back in the day. Not only that but the tallest horse was at least five foot five. So they came to being almost right above my head. None of the horses I saw were any bigger than that.

A few days into my trip I ran into a herd of wild horses who were alongside the road I was driving on. I stopped, rolled down my window and did my best to get pictures of them but they were pretty skittish by my presence. They avoided me and eventually walked away from me entirely. Getting pictures of them was difficult and I hoped that later on, I would have a better chance of snapping some shots of them. 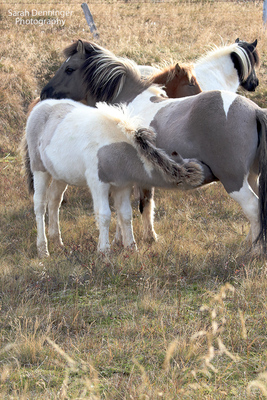 Fast forward to almost the end of the trip and it finally happened. I was going past this old abandoned farmhouse when I started seeing this herd of horses. Slowing down and pulling over I slowly got out of the car. I took my longer lens, put it in my pocket just in case and went towards them. They were behind a fence but I was still cautious about approaching them. I didn't want to spook them and ruin my chances of getting pictures of them. Slowly approaching I noticed that oen of the horses took an interest in me and came closer to the fence line. I was snapping away when one of the horses went still. Being slow and putting my hand out towards her and waited as she sniffed my hand.

After a minute I slowly put my hand on her and started to slowly pet her. Cautious but not afraid of me she slowly warmed up to me and got closer to the fence line. She put her head over the fence and started snacking on the grass that I was standing near. After a few minutes of petting and snapping the other horses caught on and started coming to the fence. They understood what was going on.

I give you pets if you let me take a few snaps of you.

All of them were super friendly and all of them didn't mind me taking photos. Some of them seemed to enjoy it. I think they really wanted some love and compassion and I happened to give that to them. They were loving every bit of attention I gave to them and I loved every second of giving them all the love.

As a result of their cooperation, I was able to get some fun shots of them. I've always had a soft spot for horses and being able to get photos of these amazing creatures made the little girl in me scream in glee.