As some of you may know I am a nerd. I grew up around all kinds of movies and my dad introduced me to a lot of different worlds. Star Wars, L.O.T.R, Star Trek, Avatar, Harry Potter, and so many more wonderful worlds of magic, fighting, blood, and just beauty. The one that has really stuck with me though is L.O.T.R. The movies are based in one of the most beautiful places in the world and when I got to visit the country I was so in love. Everything about it was amazing. The sights, the people, the hikes, the idea that you can literally look out your window and feel like your in the movies. Everything about it is like a dream. Honestly, I never wanted to leave.

Visiting that country just made my love for the movies that much stronger. While I was visiting Hobbiton I almost brought back the one ring. I got so close. I really considered it. But in the end, I came home with plenty of other souvenirs. When I got home and we visited my weapons dealer I ended up buying Legolas's bow from the Hobbit movies and I am so proud of that piece. It sits in full view so I can admire its beauty.

Of course when it comes to things from L.O.T.R's I feel like I have to have a certification for the items that I collect. I am one of those people that won't accept fraud and honestly if you were collecting to keep them and pass them down, you would want the certificates to. Noticing that I have a particular taste my boyfriend did something that made my heart melt. He is going home for Christmas so last night we went ahead and had our own Christmas. When we sat down to open gifts he only has one gift. It was small and nicely wrapped. As I opened the gift I realized that it was in a small box and when I opened the box there it was. On the outside of the box were the words....

Lord of the Rings. 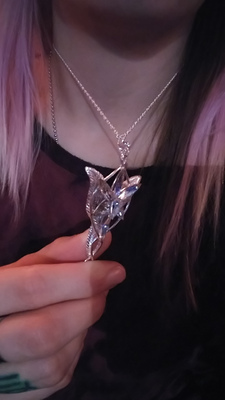 Carefully I opened the box and unwrapped what was inside. To my surprise, I realized that I was holding the Evenstar. The necklace that Arwen ears in the original movies. The meaning is Noble Maiden and it is given the Aragorn as a sign of her love and that she is giving up her immortality for him. In other words, its a sign of their love. Of course, there is more behind the necklace itself but it is a true gem. I'm not going to lie, It is one of those things that I Have wanted but as a sign from someone, I love and loves me back.

Of course, inside the box was a small certificate of authentification which made it even better. I'm so happy to have received such a gift. 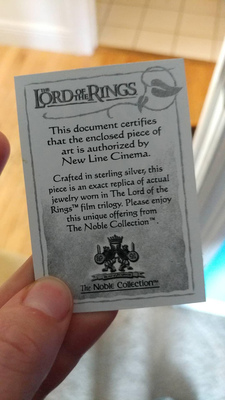