So I did a thing. I decided to drastically lower the prices on all of the pieces that I Have leftover. So here they are, cheaper than ever before. Please help me say goodbye to them by making a purchase today. It would help me out greatly.

These pieces need new homes and I would love if I could finally write in my books that they were sold. If you could share these pieces with people and let them know they are on a super sale that would be awesome. Thank you all so much.


Inside scoop on the van

It's funny the things you learn when you live in a campervan on and off for eight weeks. At the beginning of my trip, I slept in the van for four to five days at a time and then took a break at someone's house for about three to five days. Then my Bf came to visit in Utah and we got to see Zion, Bryce, and Arches before heading to vegas where he would fly home. Once I got there I stayed with a friend for a few days to regroup. After that, I was on my own. From vegas, until I got back to Tennessee I was in the van for three weeks. Three weeks. At that time the van got disgusting and at one point I finally gave it a wash because it was so badly cracked in the dirt. The water was disgusting. Brown and full of leftover salt from the salt flats. I cleaned it as best as I could and then went on my way.

In terms of the inside, I had bought a small broom with a dustpan and tried to clean it a little bit every day. Between Lylah and I, we dragged so much dirt in the van that when we walked around in it I could feel the tiny grains of sand, dirt, and rocks as I walked around in that small space. It really was kind of frustrating but that's ok. We did the best we could with what we had. Trash and water were also two things I did my best with. Ya'll water is expensive. If you are trying to keep you and a dog hydrated it really does add up. Whenever we could we filled up plastic containers of water with the streams we ran into. Those were used for Lylah and to also wash the dishes. For the trash, we threw things away as we went. I had bought a roll of trash bags and I only have a few left. So much trash was thrown out on the entire trip.

I also realized that I will use as many clothes as I can before I pay for laundry. I have a mesh bag that I kept hanging on the side of the van. I put my laundry in it as I went and it was completely filled by a week and a half. With towels, clothes, and a show or two, it gets full quickly. At one of the campgrounds, we were staying at I paid for laundry but only because I ran out of underwear and warm clothes. So I did my best to get everything washed, including the dog's toys, and that was enough for me to get home. It also helped that at certain places I bought shirts on the way since I don't really have many long sleeves in the first place but even less in the van.

With the van not being converted space was also a problem for us. We had stuff everywhere and it seemed like I was reorganizing every few days, trying to find the best way to keep our stuff from becoming trashed. It was a struggle but a struggle I was ok with figuring out. By next fall the van will be converted and I now know what I do and don't need to make the trip easier on us and more comfortable.

One of the states I visited was Idaho. I had never been there before and the first time I visited (in the beginning of my trip) it was short and we didn't go very far into Idaho to really get an impression of what the state was like. It seemed like mostly wheat fields and towns of people in random places. We did a twelve-mile hike on a paved section in a town and after that, we moved towards the Tetons. On my way back to the eat though I decided to go to Stanley Idaho. For those who haven't been to Stanley Idaho, I recommend visiting it at least once.

Stanley is a little town in the middle of four national forests. The population is 63 people and they have a cafe that is situated in the middle of the town. So if you are passing through or want to grab something before a hike in the area then that is the place to stop. So we stopped and checked out this very small town. The second I got my food and coffee I could tell that people knew each other really well. Even the kids that lived in the area were all close-knit. I listened as people talked around me and eventually I got to talking to a couple that had their Goldendoodle puppy with them. They were from the area and they were helpful on this little adventure. They gave me a recommended hike and told me that it was one of the best areas to check out.

I thanked them, finished my burrito, and took my coffee with me. We went to this little hike and started the trek. It turned out that the hike was easy and all around It was a five-mile hike. YOu got to go to the end where there is a small stream but you get this grand view of the sawtooth mountain range. You can go another mile or so and you will hit a lake which is supposed to be pretty cool but I started to feel raindrops so we started back before we got caught in the monsoon that would possibly hit us. 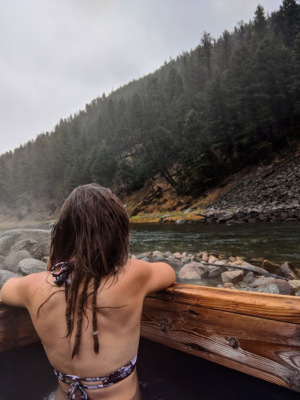 On the way out of Stanley, I ran into this little area of local hot springs. I got out to check it out and despite the rain, I got into a tub filled with steaming water and sat for thirty minutes soaking it in. It was free and local. How can I say no to that? If you go there I recommend taking a dip in the springs. It may seem crazy if it's cold as **** out but honestly, that is what makes it worth it. The cold vs the boiling hot.

Idaho surprised me and made me feel all at home. I really was happy with the way things turned out and happy we got to hang out there before heading home. It changed my view of the state and I would like to do some more hiking through there. We only got to check out a very small section but it was a good one that I would send people to if you were crunched on time.

Side note: They are only open for part of the year (the cafe). From what I understand they are open from spring all the way till late October and then they close. So if you go there be aware that the snow comes in hard and if you get trapped you might not be able to get back out of that area. The roads are two lane and take a lot of time to drive through.

The area I did the hike in is also called Redfish Lake.

Back in the clutches of the east, we are currently resting. Yes, we are back east. It's a sad moment when I got through Nebraska because I could instantly tell that I was back in the areas that I grew up in. The scenery changed and things became more apparent. For almost eight weeks I had been living in the west, enjoying the weather, the scenery, hiking, and just living in this blissful moment that I was more than happy I got to do. I'm not upset that I went west and I'm not mad at the fact that I spent a lot of money to make it happen. I think I'm upset because I know it will be a while before I go back in that direction. I'm currently looking for an online job that I can do at home. This way I can be home with the animals, focus on my happiness and fitness, and work hard to make the money I need to make the move out west. Everything is slow to come together but that's ok.

I hope by next summer I will be officially out west. That is the goal away. I'm thinking of either Colorado or Oregon. Both were so much fun to explore and I really enjoyed both areas and all the things I got to do there. I'm not sure what I can do to get in that direction and I'm not sure which state is better in the long run but at least I have narrowed down the map a bit. Of course, there is a third option where I live out a van for a year and I install an internet server so that I can work from my house. That is an option that I have put on the back burner. If things don't go as the plan that is what I am wanting to do.

Keeping my fingers crossed I can make this dream come true. It seems things are going in my favor after a long wait.

Today and tomorrow i will be driving home (to be my dad's place to be exact) The remainder of the drive is 20 hours so you best believe that this is gonna be a big few days on my bank. So I ask that if you have time please check out my art gallery. Anybody purchasing what i have left is much appreciated. If you don't have any need to decorate your walls, then there is a donation button on the right hand side of the page.

I appreciate you guys for being so supportive and for helping out when you can. It's been amazing and i really appreciate you guys. I've asked for a lot and i know it can be a little bit much but this is my last request. Thank you guys so much. I can't wait to share all the lovely things I've captured with you guys