If you guys are regulars on this blog you know that my dad and I have two cats. My cat is Cinnamon Spice and I post pictures of her almost every single day on my Instagram (@sarah_and_spice) but then there is Midnight who is a lot harder to take pictures of. The main reason for that is because of how black his fur is. He blends into most objects and getting expressions is difficult to nail down. He often runs off before you can get things in focus and when he moves it makes the pictures blurry. This Christmas was one of those lucky holidays for me and my camera.

I managed to get a picture of him and not just any picture, I got pictures of him underneath the Christmas tree. Not only does he look good but you can actually see him in all of his weird glory. 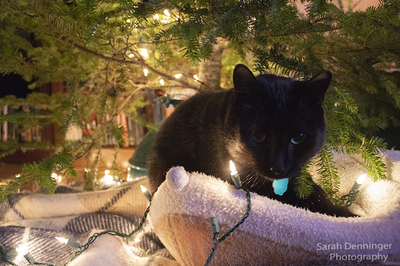 I brought Midnight home as a Birthday gift for my dad. He's been with us for about three or so years now and he finally is letting all of his personality out. The first year he mainly just would let you pet him, give him belly rubs, play with him and just kind of chill. He hated being picked up and he definitely didn't like it when you yelled at him. He would often run away if you came after him for doing something bad. He would even stay away from Spice for a good portion of the time and would often leave her alone when she hissed or was uncomfortable.

Fast forward to now and things have changed drastically. Midnight now doesn't mind being picked up but it's only for a limited time. He sits on my dad's lap and just hangs out with him while he works. Midnight even gets jealous of Spice and will often make a statement to try and chase her off so that he can have her spot. He has come so far and I am so proud of him. He really went from being the tough guy to a softy.

This is Midnight underneath the tree, enjoying our company as we chill together. 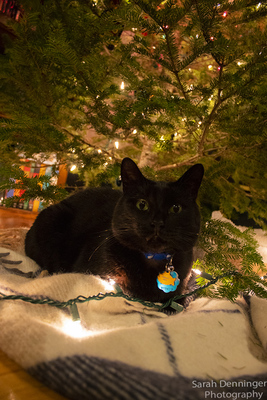