We took a day and a half to do the falls. There’s a lot to see and experience so doing it in one day is almost impossible. There’s too many things to decide on and honestly they close most of the rides and attractions around eight p.m. It kind of puts you in a bind because you have to go on two different sides. One the Canadian and one the U.S. Now from my previous experience at the Falls I already knew what was worth doing on the American side so it got narrowed down the Cave of the Winds and the Three Sisters Islands. We were going to do the Maid of the Mist on that side as well but Canada gave us a better deal with the illumination and with booze so that was crossed off our list.

When we got to the falls the next day we immediately went and did Behind the Falls on the Canadian side. It was something that sounded incredible and I honestly wanted to experience this more than anything else. It sounded so badass and I thought that my dad would love it more than I would. So we get in line, buy the tickets, do the whole "picture" that they always ask you to do and then put on our ridiculous ponchos. They are never 100% water resistant but at least 80% of your body is covered. So we get down the elevator, out into the tunnel and start going down. Immediately we become amazed. The whole structure was done by hand and no explosives were used to make the tunnels. The old entrance still stands but just barely. There is only one wooden beam that seems to be holding it up and behind that its caved in. As a precaution they put a bared door so that you can look through but not actually be in the old tunnel.

The real fun though was going down the stairs and onto the platform that puts you right next to the horse-shoe falls. Its loud, you’re getting sprayed with water and its apparent that they had bigger things for the attraction but I think the eroding over time made it impossible to continue to make the attraction bigger then it is already. 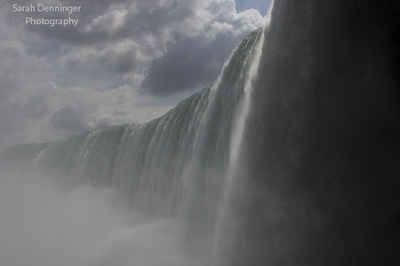 We took our pictures and then moved to being in the tunnel where they explained the history of the horse-shoe falls and all the people who have attempted to go over the falls. The gave us a description of what they tried to do in the past and how they managed the eroding of the rocks. Of course the tunnel was interesting and there were two places where the tunnel went out to the horse-shoe falls and you could touch the falls but im assuming that someone messed up and fell or go injured and they had to bar it off at a certain distance. 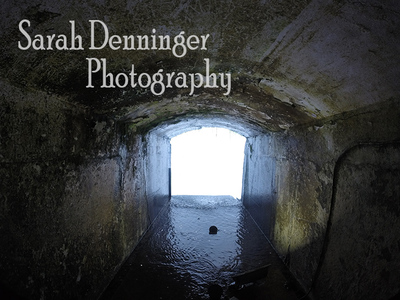 After we got done exploring all the fun parts of the attraction we decided to head over to the U.S part but of course not until we had a drink so we walked until we found a bar, bought a drink and from there proceeded to make our way to the Rainbow Bridge. There you have the option of walking the American Falls and go back in the U.S as long as you have a passport. The only fee you pay is .50 to get out of Canada and to walk across the rainbow bridge. Once we were across and checked back into the U.S we went to the Cave of the winds. This was my favorite attraction on the U.S Side and I wanted my dad to experience it as well.

So we do the trolley for $3 and ride over to the falls. Once were there we buy tickets and they give us sandals and of course ponchos. So we do the protocol, go in the line and into the elevator where they take you straight down to the tunnel out to the walkway. Once you walk down a ways you reach the platforms. You get to spend as much time as you please going on the platforms and of course, take pictures at your own risk. So of course the Go Pro became a very handy thing to have for this attraction. My dad was not disappointed and we took some risks with the cameras. IN and out of the bag they went and when we got to the third platform we were getting too soaked to risk anymore and from there the Go Pro took over.

Once we were all finished we went back to Canada and got some food. It was really fun to experience this again and I’m glad I got to share some of this with my dad, I know that he was NOT disappointed in the attractions.