Once we were done with Niagara Fall's we decided that the next day we were gonna go explore Toronto but first we needed to get City Pass booklets. Basically it saves you a ton of money if you want to see some awesome attractions in the area. WE decided to do two attractions after we got some coffee and the booklet. We were gonna do the CN Tower around Sunset and in the meantime go explore the Royal Museum. Now I don’t know about you guys but when I read Royal Museum I imagined it to be ALL about the royalty when it came to the line of the queen. Nope, it was a museum that had five levels. It went from Chinese, Canada, and Native history to the evolution of the world. It was so crazy to see all of it in one place and we did not get to tour all of it. We almost did but we had to leave at a certain time to get the train and get to the tower on time. Overall though it was super cool to walk through and they had a piece about Egypt and that was by far my favorite. For some reason the Egyptians have always made me curious and intrigued. So mysterious, it makes me question about the past a lot.

From there we made our way to the CN Tower. Now I want to do a lot of crazy things and one is skydiving but this tower was another experience all together. It was so high in the air. The tower is a total of 1,815 ft and the elevator that takes you up has glass paneling on it. Now the going up in the elevator wasn’t what got me but the actual glass panel. That got to me. I felt disoriented and I know it’s from mostly my imagination. The CN Tower is amazing and beautiful but this was something else. You’re basically a needle that goes up, and you have an area that is entirely made of glass all the way around. 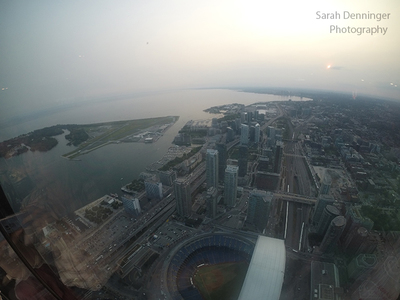 First: Its an amazing view I will give you that but I can’t help but think of all of us as a target up there. I know that the likely event of something like 9/11 happening at that exact moment was very low but of course it was still something that could happen and you never know if it will. Right now we have so much going on in the world and a lot of people are pointing fingers at each other about setting off bombs, there are fires breaking out all over the U.S, people beating up on others because they were caught off by a guy on a motorcycle, horses collapsing from being used for pulling carts in cities, and of course the hurricanes. I think we are in a rough time right now and so much is going on that most of us have become numb to it all but in that moment the thoughts of that place being a target was very real. Of course I still enjoyed the experience and I would do it again, but I also couldn’t stop my thoughts.

Once the sun had set and we were satisfied we went down to the glass floor. I thought the entire floor was glass and honestly that sounded awesome from a photographer aspect, it would look like you were floating but it also founded like I may break from the thought of falling through the floor and to my doom. Yet I realized how crazy that would be when I came up to only a section being see through on the glass. We tried to take pictures but it was hard because you weren’t the only one there. I wanted to get these awesome photos and had thought of all the things I could have done but sadly the opportunity dint present itself.

I went down to the ground with a realization of one of my fears and really that would be the destruction of our country and the possibility of us getting caught in the crossfire somehow. I left knowing a little bit more about myself and also happy that I got to experience something that truly is amazing.