Not all animals like the glam life
Travels - Queen of Trades; Travel and Photography

One of the biggest things I have learned so far about pet sitting is that not all pets like the camera. I definitely experienced that on this most recent dog sitting trip. In the apartment were four animals. There was Mila the little four-month-old puppy, Pumpkin who was a beautiful orange calico, Katie who was the sister of Pumpkin and had more of a grey calico color, and Piper who was a rare albino bunny rabbit that loved to come and go as she pleased. When it came to Mila and Katie they didn't really care about the camera and would just sit there and stare at you while you snapped away. For photos, it was a nice experience, even if Katie did growl at you most of the time.

Pumpkin, on the other hand, wanted no business with the camera at all. She was difficult to track down and whenever you got it out she knew exactly what it was and right after the first click she would run off and wouldn't stop running until you put the camera down. Fortunately, I was able to get photos of her when she went out on the balcony and had nowhere to go. Now I normally would never corner an animal in such a way but Pumpkin only stared at me upset that she got caught in such a way and let me take a few photos. Sometimes you have to wait for the chance to capture them when they least expect it. 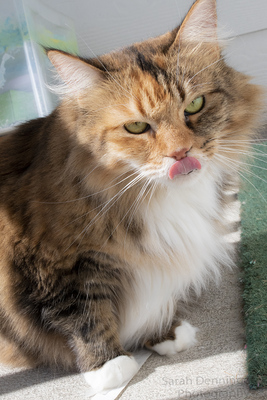 Piper, on the other hand, was a halfway kind of animal. She didn't mind the camera but she also seemed to not give a single F***. If you didn't get the capture in time then that was that. You lost, too bad so sad. She moved around a lot and when she sat still you had about five minutes to capture the image before she hopped away to go eat something or go back in her cage. She really didn't seem to care too much about what you had in mind.

Sometimes capturing animals takes a bit of work. You have to be ready to get them when they do something you least expect and having your camera on you at all times is a must. The photos of all these precious animals have helped me get hired over the past three months and it really has helped with my photography skills. Animals move and that gives me a chance to capture them as they leap, jump, yawn, stretch, and run. Photography is an art and I am in love with it. The fact that I get to capture animals while doing it is just a plus.