So the past three weeks has been a roller-coaster ride when it comes to my half marathon Training. At this point and time I have reached the nine mile marker and I can happily say that I can run the nine miles. It was hard to concentrate after a while but I managed to find ways to keep myself going. While I was running I was looking at the houses in the neighborhoods I was running in. I was seeing who had boarded up and who hadn’t. Not too surprisingly there were very few houses who had boarded up. There was even one that had Irma spray-painted on the front door. Kind of dramatic but that’s ok. Really it seemed to make the run more interesting and made me think of the type of people who lived there.

As I was running I also noticed that there were a lot of For Sale signs up all of the sudden. It made me wonder if people were just putting them up because they knew their house wouldn’t exist anymore when the hurricane passed or if it was one of those "were tired of Florida" things and they just hadn’t found anybody to buy the house yet. In any case there were quite a bit of people who had the for sale signs up. So of course I took all of this in while I was running my nine mile trek. There were even people that kept coming out on the streets and I had to move to avoid hitting them. I was on a path and I was going to finish one way or the other. 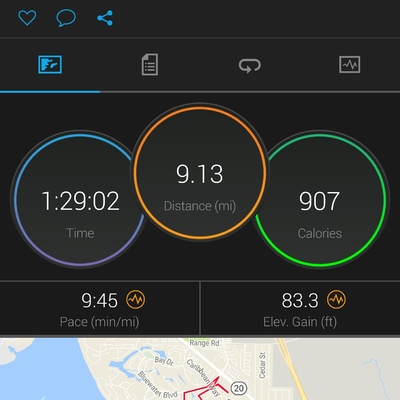 AS I kept going on my nine mile trek I think I forgot about how much further I had. I just kept thinking about the areas I was running in as foreign lands. Lands that I conquered as I finished up a certain area. I think in the end that was what kept me going. Just thinking about sections of the run as me conquering lands. It kept my mind busy and I would find myself smiling at random times. I think it was the idea that I was beating my imaginary enemies that kept me going through it all and made the run that much better.

That with the winds that were cooling me down while I ran I felt pretty confident in doing the nine miles and once I was done I realized how I felt about this training and how i was glad that I switched my program to the way it is now. If I hadn’t I probably would still be at five miles. Now five miles looks like an easy task compared to the nine. The real challenge will be knowing if I can run nine miles while were in Canada.

It really is awesome to progress.