There's another place that was quite nice to see. Its across from Garden of the Gods and it's a great big open space that has plenty of hiking to choose from. All the trails are between 1 mile to 2 miles long and it's all at your own choosing. That day I decided to take Spice out for the stroll and see what happens. I wanted her to get more experience out while hiking and for her it was also going to get her out of the house. So we packed up, headed out that way and parked in a parking spot. From first glance it looks like a parking lot and only a parking lot but, once you get on the path and go a few feet, you then run into an area where you can choose which trail you want to take up.

With Spice in my arms we started up Mesa Trail. It was a harder one but I was felt like I wanted to blow off some steam so I began the climb. For a while Spice hung onto me and just went along with the ride and as we made it up further and further she started to become unamused by my carrying her and demanded her way down. So, taking a water break I stopped and safely put her on the ground. At first she seemed to think that it was a joke that we were going to even attempt this climb. She mowed at me in disapproval but despite that, we were going to do it. So we took turns, her walking a little and then when she gave up, I picked her up and carried her onward.

It didn't take long to get up to the top of the trail and the view was magnificent. It was quite beautiful and just seeing everything look so small and the layout of the city was inspiring. It was everything that I wanted to see for the day. That view was the reward. On the way down Spice walked most of the way and felt comfortable with the area enough to walk my pace. It was a day well spent and I couldn't have asked for more. 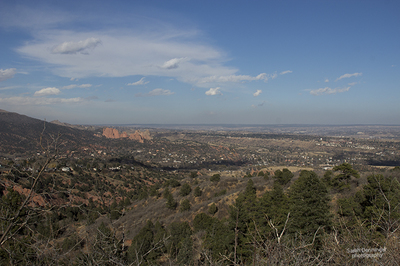