Now I love finding new places to check out. It gives me a sense of wonder and makes me excited to go out and about for the day while I go and find this new treasure that is waiting to be seen. So while I was on the internet, looking for things to do I found this place called Castle Bishop. It is amazing and from the pictures it looks like my kind of location. So while I was looking around for information on the place I noticed that there wasn't anything on if I could bring Spice with me or not so, just to play it safe I left her back at the apartment for her to relax and take it easy while momma went to go play.

So taking my camera gear, my phone, wallet and of course my shades, I headed out in the car to this place that was an hour and a half away. Let me tell you that I was suspicious while driving there so I entered the coordinates twice on two different apps to make sure that it was correct. When I got it verified I felt a little calmer about the situation. It was a beautiful drive and once you get on the mountain road the service cuts out and you are on your own.

It was beautiful and the snow looked very fresh. Taking it slow but staying optimistic I finally made it to my destination. From across the street it was hard to tell what the structure looked like but, once you got past the bushes and everything then it opens up to you and reveals this great big Castle that has crazy structures on it. Part of me was super nervous about this sudden expedition but, I was also really excited. 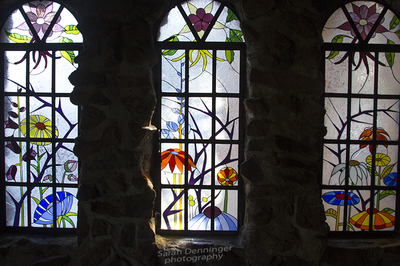 Right from the very beginning I noticed the way the structure was made. It was mostly concrete and had staircases that spiraled up and up. When you first enter you notice the big great room that you are in and even though it's empty it still feels like there is something special and hidden. It's a strange feeling but it's also like I am revisiting my childhood. The times when we used to play games where you stormed the castle and took the other players down. We used to make up all kinds of games but there was usually a base or a castle of some kind and we used to let our little minds take over and create the fantasy.

As I explored this place and took a closer look I noticed that the spiral staircases were made out of a metal frame and the only thing holding it up is the fact that the metal was literally going into the concrete walls. Even though it seemed safe I felt very nervous climbing the stairs. The other fun part about this place is the bridge at the top of the castle and the tallest tower. The bridge though was another thing entirely. It was a metal frame that arched and came to a stop at a post that was made out of metal work. The beginning of the bridge had metal frames going into the concrete. It was sketchy but being careful I decided to walk on the bridge. Right from the beginning I noticed how wobbly it was and even though I could have sworn I was going to die from it collapsing I went all the way to the other end. NOw I am not deathly afraid of heights but, the fear is still something that I am working on and I can tell you that after about fifteen minutes of being on that metal bridge I started to calm down and take in the scenery. It was wobbly but if it wasn't safe then they wouldn't have left it open. 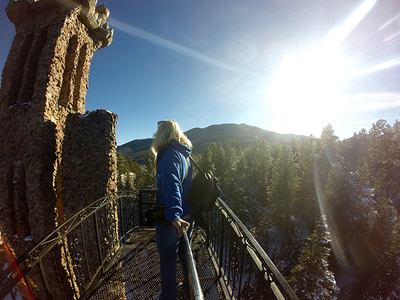 After I made my way across the bridge I went up in the metal dome. It's the same concept of the bridge and was also wobbly just not as much. It had more of a structure and even though it was very cool to be in I also knew that having a lot of people on here at once would most likely collapse the thing. While I was on this adventure I also ran into two girls who were very friendly and took some pictures for me. They commented on the heights and we got along pretty decently. They gave some encouragement and we toured part of the castle together. 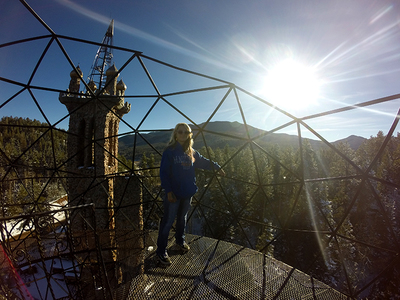 Once I did everything in the first tower, I headed down and started up the second tower. It took a little longer and this one had no hand rail. You had to use your hand and hunch down to make your way up the staircase but I will say that it was so worth the climb. At the top I ran into the two girls who were just about to head down. They pointed out the structure at the top of the tower. It was a small staircase and it had only a seat at the top. NO railing, no safety net, nothing. Feeling brave and curious, I went slowly up the steps. My insides were screaming that I was an idiot and that I needed to go down to the ground right this instant but my curious side and the view...well I went to the top and sat there. It was magnificent and I can understand why someone would build something like this and make this castle so interesting. 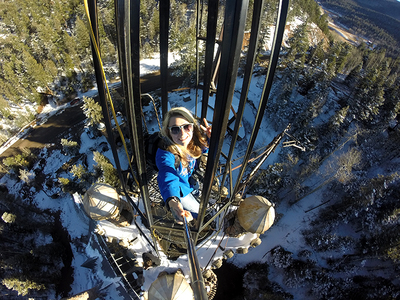 If you ever get to go To Colorado Springs and need something to do (and don't mind the drive out of town) then go check out castle Bishop. It's worth the visit and it was quite spectacular to be in. Next time I am going there for a photoshoot in the castle.