Rock Out Party At the Springs!
Travels - Queen of Trades; Travel and Photography

Rock Out Party At the Springs!

Yesterday we went to Ecofina Springs. When I originally planned this trip I thought it would be around twenty to twenty five people that would go with us. The turnout was twelve which not only was still a good turnout but it was better than I expected. See we had threats of a storm coming so a lot of people canceled because of the possibility of being caught out in the rain. Of course I tried to tell people that the storm was going to go more west of New Orleans but nobody really listened to what I was saying. As it turns out, I was right (of course) and because of that all the people who listened got to have a grand time. 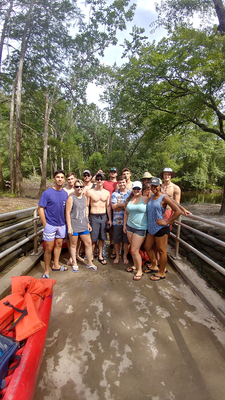 When we got to the springs we all had to sign a paper stating that we were responsible for the Kayaks and to have them back before 6 p.m or there would be a $25 late fee for each kayak, every hour. Now that is a lot of cash right there when you have 6 tandem kayaks. When we got everyone gathered, went over the rules and piled into the van we all got super hyped up. Not only was it fun to just have everyone together but it was also the anticipation of actually having a nice day out after all the rain we had.

On the ride over to the springs we could tell that our group was one of those groups that the drivers was not a fan of. We were loud, obnoxious, and just ridiculous. I am sure that they were ready to send us out there and to just be rid of us. SO when we got in the kayaks and started paddling away I'm sure that they all were talking about us on the drive back. 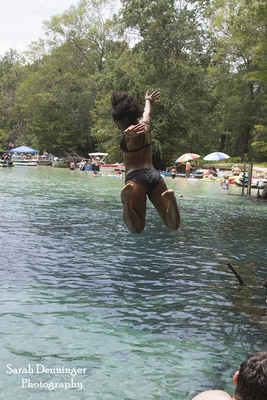 The kayaking to the springs was nice. The sun was out and it honestly was one of those scenarios where I think everyone just wanted to let out some energy and just get there to drink and let loose. So when we got there we all parked our kayaks, started playing music and brought out the drinks. When the drinking started then the rope swing parade started up. The rope swing was almost like a challenge for the guys but of course it was also a lot of fun to just see them go at it. 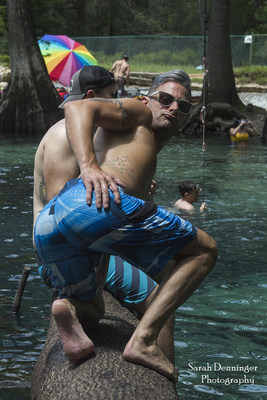 After the rope swing we had some people decide to climb a twenty five foot tree and jump out of it. One of the guys (Who I will call T) started climbing up the tree and realized that the boards that were put into the tree were pretty terrible so of course he pulled one OFF of the tree to demonstrate how terribly placed they really were. We were all standing there looking at him as he just dropped this board down into the water. Quickly someone retrieved the board so that someone didn’t land on the nails that were sticking out of it.

For about ten minutes we were screaming at him to jump out of the tree. He was already all the way up so the only way out was to jump down. Finally he did it and we all cheered as he went along. Honestly it was so fun to watch him and I, of course, got some bomb photos of his jump. 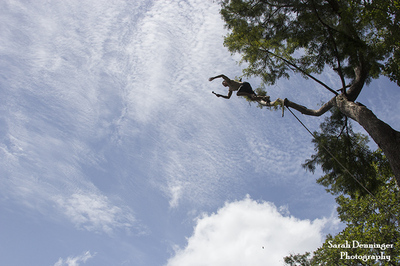 After a few hours we decided to head out after hearing the thunder storms coming our way. So we began the paddle down the stream. It took us an hour and about half way through we got down poured on but to be honest it was one of those situations that I was ok with. I love the rain and I love being out in nature. Everything was so quiet and it was even more beautiful with it raining. It was one of those scenarios that never really happens and I was glad to just be apart of it.

All in all the trip was a success and I am so glad that we got to go. I can't wait for the next Rock Out Adventure.