Yesterday was such a fun day. Even though we had to be on the road by 5:30 a.m it was still worth the drive. Yesterday me and four other people from my work decided to go to Stone Summit in Atlanta. Originally I was already going to be there but they decided to change the time of the concert. SO instead of already being there and being able to meet them I was stuck with having to do ten to twelve hour drive in one day just like everybody else but that is ok. So we all were on the road at 5:30 a.m and we all were super excited about going to a new gym. This one had top rope and bouldering. 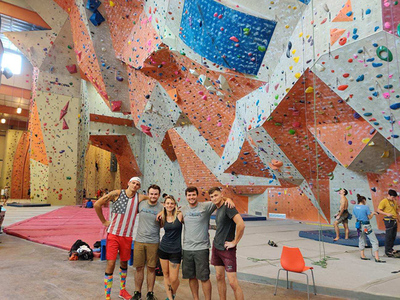 When we all finally arrived at Stone Summit we were blown away. The place was huge and even though we knew where we were going we didn't expect it to be so freaking amazing. Most of the place had lead climbing but they also had some amazing selections for top rope and of course, a tiny section for bouldering. Right away we started with Bouldering. We hoped on the walls and started climbing away. It was so much fun and I really enjoyed every second of being with these guys. We were challenging each other and having fun at the same time. Even though we all are around the same level back home some of us were doing really well on Stone Summit's V3- V5 range. It was just so cool to see everybody having a fun time. Even I ended up trying some of the overhang areas and even though my hands were beaten up I had so much fun giving the routes a try. 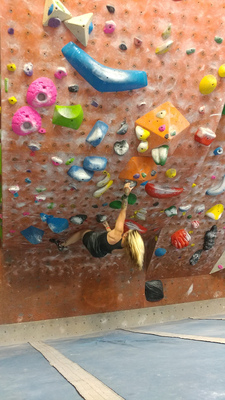 Once we were done bouldering we moved on to top rope. First though we had to pass the test. We practiced for a little bit with everybody so that we all would be able to pass and not take the class. Two people hadn't really don't a lot of top rope so it was pretty important to teach them what to do. So taking our time we all went back through the basics and once we were ready we all took the test.

Surprisingly, we all passed. Every single one. Honestly we were all so excited and I felt pretty good about it myself. It can be a lot to remember sometimes and even though it was my first time using an ATC instead of a GriGri I felt pretty good. With all us passing we went to the top rope walls and started climbing. I will say that Rock Out has made my endurance and strength much better then when I first tried top rope. I was doing 5.9's and 5.10's and when I first started I could only do 5'8's. I felt so confident and felt like I could do top rope for forever. We spent around five hours total just climbing away and by the time we finished I knew that we all were super satisfied. I honestly wish we had a top rope place near us that was like Stone Summit. There was so much to do, there were so many routes and it was so refreshing to go climb there. It re-lit the climbing candle, which I really needed.

So thank you Stone Summit for the amazing Climbing experience. We will be back and with more people!