It was Spiritual (Northern Lights Post)
Travels - Queen of Trades; Travel and Photography

Before I went to Iceland I had read that I might see the Northern lights since I am going during a time when they will be transitioning to winter. The temperatures drop into the 30's and under and if the conditions are right then you might get a chance to see the Northern Lights. Of course, there are a lot of factors that play into this. you have to have a clear sky, the temperature has to be down and of course, you have to have incredible patience to see them. The Northern Lights don't just come out when the sun goes down and dance all night long. They come and they go as they please and it can take all night if necessary for them to appear. So if you are one of those people who go to bed at 9 p.m and just refuse to stay awake well...then you won't see the lights.

I got very lucky on this trip. The Northern lights were one of those things that I really wanted to see. Its been on my bucket list forever and I really was hoping I would see them but if it didn't happens I knew that I would be disappointed but it would be ok. If I didn't see them then it wasn't fate.

On my second day here in Iceland I was star chasing. The sky was open and as I was driving to a remote location somewhere In Iceland I noticed this white cloud in the sky. For half an hour I kept wondering what it was. It looked like it was a cloud and I couldn't tell if I should stop or if I should keep going and ignore it. I thought maybe it was the clouds about to cover my stars. I was worried and after a while, I realized that I literally drove into clouds. I could no longer see the sky. So with some determination, I turned around and drove back. When I could see the sky again I pulled over, got my gear out and sat in the shivering cold aiming the camera at the sky. It was around twenty degrees and the wind was making it worse. In five minutes I felt like an icicle.

I was packing up to leave and head to a campsite when I turned around and froze. Right behind me, I saw this cloud moving. It was the one I stared at for half an hour. With interest and uncertainty, I pointed my camera at it, adjusted it a bit and clicked the button. The image came out with green.

It was the Northern Lights. 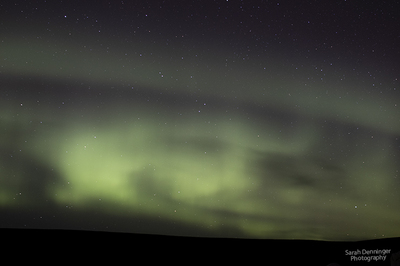 I stared in disbelief. I was staring at them the whole time. I was literally following them and I had no idea. It wasn't even clear to me that they looked like that. It was a white, fog, like a substance that was hanging in the sky and dancing around ever so slowly. With new inspiration, I took some extra shots (despite the cold) and just stared at them for as long as I could. I saw the Northern Lights. They weren't bright to the eye but they were still very cool to look at.


The next night I made my way to this campground and I was starving. When I arrived I was unsure if the campground was even open because when I got there there was this log in the way. I tried to move it but the log was too big and too heavy to move on my own. So sadly I pulled off to the side and decided to cook some food before I made my way to a different campsite back towards the town nearby. I really thought it was closed. As I was cooking this car pulls up behind me and this elderly man steps out.

He asks me if I was looking to camp at the campsite. When I told him yes and that I thought it was closed he explained that he had to move the campground because tourists were saying it was "too touristy"  and with a smile he pointed to me where the campground was moved to. We chatted as I gave him my card and paid for the night. Apparently, this gentleman came over to Iceland 13 years ago to check out the country and he had told himself that he was only going to stay here for a year.

He ended up buying a house and moving here. He's been a citizen ever since.

I was amazed and as we chatted he then pointed out that there were some free hot tubs down the street that was literally on the water. I thanked him kindly, finished cooking my food and we parted ways. I did enjoy the hot tub that night. I was exhausted, sore and I just wanted some peace and quiet. Since it was a frigid thirty degrees outside the hot tub was so satisfying that I literally melted into it. It was like home.  For two hours I sat and listened to my music and enjoyed the cold vs the hot. I never wanted to leave but knew I had to. When I did I made a decision to go ahead and chase some stars since I was already out and the sky was clear. 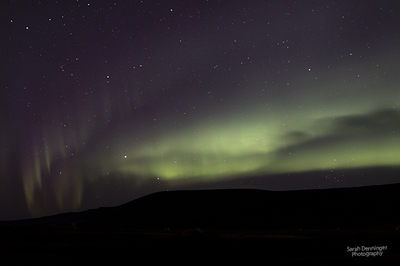 After a quick shower near the hot tub, I got in the car and drove a little aways from the town. I got out and started shooting. Quickly I noticed that there was a bright light in my photos. The camera was having trouble focusing. So I turned the camera to the left and shot some more shots. The photos turned out bright green. I was seeing them, again. As I was shooting I realized that the location I was in was not the best so with urgency I packed up and drove a little bit more aways. Once I got to a satisfying spot I got out, walked into this guy's property (sorry dude, I just wanted to get some good shots) and shot away. Right before my eyes, I could see the lights dancing and they were such a bright brilliant green. It was so surreal and at that moment I understood why people chase the lights.

It's difficult to describe them. I believe in spiritual existence and even if the northern lights are explained by science all of that went out the door when I saw them so bright and green in front of me. I was like another being up in the sky. It was like I was seeing everything and anything with my own eyes. It wasn't god-like in any way but just very spiritual. It was like staring at a soul or the inside of the universe. It was beautiful, it was moving, it was everything and more. I didn't want to leave. I sat for as long as I could and took as many shots as I could. But eventually, I had to go because I was freezing and it was already past midnight by the time I got to get these photos. So sadly I packed up and a sad goodbye to this brillance I just witnessed.

Moments like these are why I travel and even if the rest of the trip went sour (it didn't but if it did) jsut seeing the Northern Lights made it worth it. It made the trip complete just seeing them.