Cracked in Half
Travels - Queen of Trades; Travel and Photography

I just got off a seven-hour flight and I am officially back in the united states. Currently, I'm sitting in Fort Worth waiting for my next flight having some coffee to keep me going and while I am sitting here I want to tell you something I noticed while I was on my flight back to the United States.

So while I was sitting on the flight reading a book called Tiny But Mighty by Kitten Lady I decided to go ahead and take off my shoes. It was a long flight and my right foot was hurting a little bit so I thought maybe it was from wearing the shoes as often as I was and decided it was a good idea to give my foot a break. With a little bit of a struggle, I got the shoes off and settled back into the flight reading onward about neonates and how to bottle feed them. The book was fascinating but I realized (after a few minutes) that my foot was still hurting and when I flex it the foot hurts in a particular spot. Confused I took off my sock and glanced down at it.

From the angle, I was sitting at it looked like a blister of some kind but it was hard to tell so after a minute of thinking and considering the options I got up and went to the bathroom to look at my foot more carefully. ALmost in the middle of my foot was a tiny hole. The skin was ripped and it was red but not bleeding. Trying to figure out how I got such an injury I went back to my seat and picked up my shoes and started to inspect. I stuck my hand in, felt around and right away something felt off about the inside of the shoe. It felt rippled almost like the bottom of the shoe but inside my shoe.

With some questions and interest peaked I turned the shoe over. At first glance, the shoe looked fine but then I flexed it a little. The bottom of the shoe literally had a hole ripped in it. Not enough to rip the shoe in half but pretty damn close. I lifted up the left one, the same damn thing in the same place. 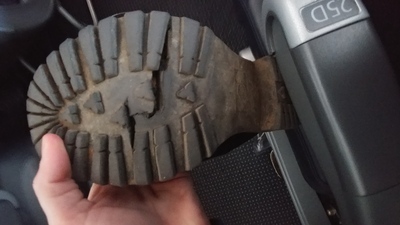 Everything fell into place right then and there. IT explained all the wet feet, the mud getting in, and the random rocks that would end up rubbing on my toes. I was amazed. They didn't even look broken when I left for Iceland and just glancing at them you would never know, yet here it was, right in front of me all in plain sight.

Now I know that these shoes, once great shoes, weren't actually terrible shoes but just junk from use. I literally tore A hole in them which means I did well and I used the shoe Until I couldn't anymore. At least I am on my way home now and not out in the wilderness somewhere.

When I get home, these shoes will go straight in the trash.