Make you work for it
Travels - Queen of Trades; Travel and Photography

Make you work for it

One of the things I learned quickly here in iceland is that the hiking is intense. What they call "moderate" here is actually considered difficult back in the United states. Just hiking three miles is a feat just because of how steep everything is. I learned this from my very first hike a few hours after I got my camper van. I had no idea where I was going, all I knew was that I needed coffee go keep myself going and while searching for it I ended up running into this trail.

Of course I couldn't read the sign because it was in islandic (of whatever the language is here) and not a lick of english but I did know that the trail was at least 3 miles long. Of course they have everything in kilometers here so it was guess work on my part but I figured I would grab my camera and get to hiking. After all what was the worst thing that could happen. 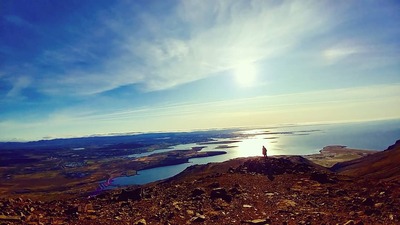 So with a more positive mindset and a cup of coffee in me I started this trek up. At first it seemed pretty normal and I honestly felt pretty good. Even though I had jetlag I seemed to be ok with the climb. About a mile in things changed quickly. The view was spectacular, sure but my legs were working to get up this climb. I stopped at a sign to see where I was and how far I had to go and which direction (I came to a fork in the trail) and after a minute of trying to figure it out I gave up. Luckily though, a women came up go me and asked if I needed help. When I asked her which way to go she explained that one was shorter but very steep and the other path was a little easier but longer. Thanking her I stood and looked at the view in front of me and the destination behind me. It looked far but I had nothing else to do so I decided to do the short cut and started going up.

The trail was no joke but the view, was incredible. I ended up going 2,552 ft and I even signed a book up there to show I did it. It was a nice turn around after the craziness I had with getting my camper. I just felt so down and I had no idea what to do but stretching my legs, getting some coffee and having some time to really get a look at where I was need up making me feel better. Of course it was only the beginning of may adventure.