After our few days in the hotel we then decided to head out to Raven Cliff. Its about five miles from Helen and the hike itself is about two miles out and then of course two miles back. The nice thing about the trail is that they have campsites everywhere and it is all first come first serve. when I got there there were a couple of people that were interested in Spice and why she was with me on the trial. I talked to a guy who had three dogs and she instantly became a hissing machine. Shes not used to seeing dogs so she became very upset with this sudden intrusion. 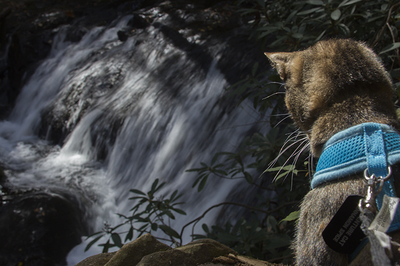 Once we got on the trail she walked on the leash and we went to the first campsite and dropped off the heavy things. Once that was done we then decided to go ahead and walk the trail and go see the waterfall at the end of the trail. Being patient and wanting her to do the trail on her own I let her walk most of the way out there. She did very well and I honestly was expecting worse. I thought she wouldgive up and not want to go to the end but as it turns out, she just decided that she was her own master and she wanted to walk on her own.

We had a blast and quite honestly I think she got her first real taste of what the outdoor adventure is like. She was slow, slower then I would like but that happens when you put a cat that has mostly been inside in a situation that they are not used to. There were times when she tried to escape from her harness and I thought that she was going to really go crazy and wiggle out of it but each time I managed to calm her down and let her know that she was ok. By time time we got to the end of the waterfall she had quite the following and people were very interested in her. I got to talk to a lot of people about the adventures that I go on and about her training. 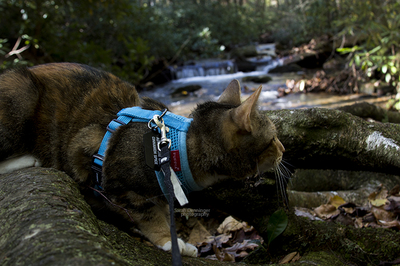 On the way back though I did have to pick her up and carry her back to the campsite since it was getting cold and dark quickly. She protested for a while but after a half mile she gave in and became quiet.

I can honestly say that I am so happy that we get to do this adventure and this is only the beginning of our adventures.